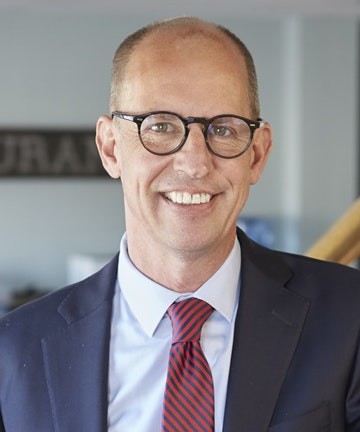 Tim, along with his brother George, is a third generation owner of The Russell Agency, LLC. The Russell Agency is an independent insurance agency located in Southport, CT.
Tim received his Bachelors of Business Administration in Risk Management and Insurance, with an Agency Management tract, from The University of Georgia. He joined the Agency in 1994, where he concentrates mainly on Commercial insurance. Since joining the Agency, Tim and George have seen the Agency volume grow many times over.
Tim is Chairman of the Flood Insurance Producers National Committee (FIPNC). FIPNC provides the Federal Insurance and Mitigation Administration (FIMA) with expertise in the areas of flood insurance product design and development, producer education, the realities of marketing and servicing the National Flood Insurance Program (NFIP) and the community/buyer temperament. FIPNC also provides professional advice and counsel on all issues related to insurance agents’ involvement in the NFIP.
Tim is a Past President of the National Association of Professional Insurance Agents (PIA). His term in office was October 2017 to October 2018. Founded in 1931, PIA is a national trade association that represents member insurance agents and their employees who sell and service all kinds of insurance, but specialize in coverage of automobiles, homes and businesses.
From 2011 till 2017, Tim served as Connecticut’s National Director for PIA. He still enjoys participating in their lobbying efforts both in Hartford and in Washington D.C. During his tenure with PIA, he has met with many influential lawmakers including Governors Rell & Malloy, along with Senators Joe Lieberman, Chris Dodd, Richard Blumenthal, and Chris Murphy as well as Representatives Jim Himes, Elizabeth Esty, John Larson, Joe Courtney and Rosa DeLaura. Prior to being elected National Director, Tim served as President of PIA Connecticut (PIACT).
In 2010, Tim was named the National Professional Agent of the Year by PIA. Tim was honored for his contributions to the insurance industry, the independent agency system and to his PIA colleagues, along with his commitment to education, involvement in community affairs and overall success.
In 2009, Tim was chosen as the Professional Insurance Agent of the Year by PIACT.
From 2005-2007, Tim served as President of the Southern Connecticut Chapter of the Chartered Property and Casualty Underwriters. During his term, the Chapter began a series of joint meetings with the Professional Insurance Agents of Connecticut featuring the Commissioner of Insurance for the State of Connecticut.
Tim is very active in civic and industry groups. He served as President of the Fairfield Rotary Club from 2003-2004. During his term, he organized the Club’s first Celebrity Luncheon which has since gone on to raise over $400,000 for local and international charities.
Tim is a past member of the Executive Board of the Fairfield Museum and History Center and a Past President of the Southport Merchants Association. He is the current Chairman of the Southport Blessing of the Fleet and Street Parade.
Tim lives in Sandy Hook, CT with his wife Bobbie Sue (also a Georgia grad – Go Dawgs!) and their three children, Judge, Walker, and Mila.